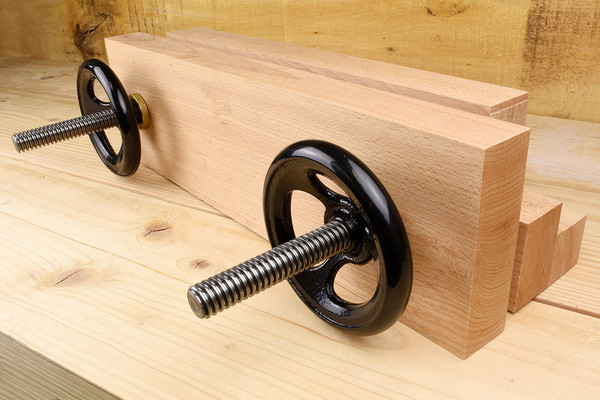 The Moxon vice wasn't invented by Joseph Moxon, in his book Mechanick Exercises he referred to it as a "double screw vice" and there is evidence of similar devices that pre-date him by some 300 years. It remains however, a very useful tool - a simple demountable system that can be used as required and stored out of the way when not in use.

The Moxon vice is held in place with holdfasts or F-clamps, usually on the edge of the bench with the back jaw overhanging the edge by a hair to give full clearance to the floor and raising your working height by 5½" (140mm) above the bench surface. This gives a better position for accurate fiddly jobs on ends and edges - like sawing dovetails, cutting and paring tenons, ploughing grooves etc.

With a suitable batten to support it, the Moxon vice can also be used on its back as a clamp (e.g. panel glue ups), mounted in the front vice to clamp work vertically (poor mans patternmakers vice) and its large faces can be pressed into service for small veneering jobs.

Drill a couple of dog holes in the top of each block and you have all the versatility of a 1970's aluminium folding workbench - without the wobble. Cut a V groove in the faces and you can hold small round things safely in the drill press... the only limit is your imagination!

The wide jaws are well made from 45mm thick European beech and have a clear 13 inches (33cm) between the screws. The holes in the moving jaw are slotted, giving an allowance for rack - if you have to plane a tapered leg for example.