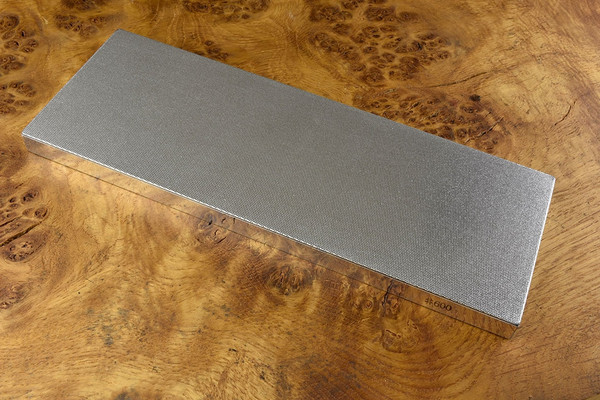 An edge is only ever as good as the worst of the two surfaces that meet to create it. You can get away with going straight from 400 to 1200 it on tiny surfaces like secondary bevels, but for the larger surface on the flat side it is too much of a jump.

JIS600 is equivalent to 29 microns, which doesn't sound much finer than the 40 micron stones on the 400, but the difference in the surface produced is massive. The 600 will do 80% of the refining work you would otherwise be doing with the 1200 for 20% of the effort – so both plates will last many times longer.

The Atoma plates we have inspected have all been remarkably flat.

Use plenty of fluid and light pressure.

Fading the pressure out gradually as you finish will leave a finer scratch pattern and reduce the amount of strokes you need to take on the next plate.

Use light pressure, the diamonds are cutting tools and if you let them do their job they will serve you well for many years.

Expect all diamond surfaces to have a vicious bite initially and then gradually bed in over the first few uses, this is completely normal. As long as you keep them clean and cool and avoid using too much pressure they will cut like the wind for years.

Use liberal quantities of some kind of fluid on them, water with a few drops of dish soap, window cleaner, water treated with Honerite Gold all work well.

Avoid using them with soft metals like brass, wrought iron or aluminium as these will gum up the surface and are impossible to remove.

Avoid using them for the bevels of laminated blades as the backing material is often soft and will gum up the surface.

Avoid using too much pressure, especially on the edges, the diamonds themselves are virtually indestructible, the electroplating that holds them to the surface will last much longer if you don't lean on it and scrub.

Avoid using oily lubricants on them, the greasy residues attract dust which will gum up the surface.