Addendum: Stan Shaw, one of the last little mesters of Sheffield, died aged 94 in March 2021 after a career that spanned almost 80 years. Back in Sept 2017 I had the enormous privilege to spend a few minutes at the bench with him. 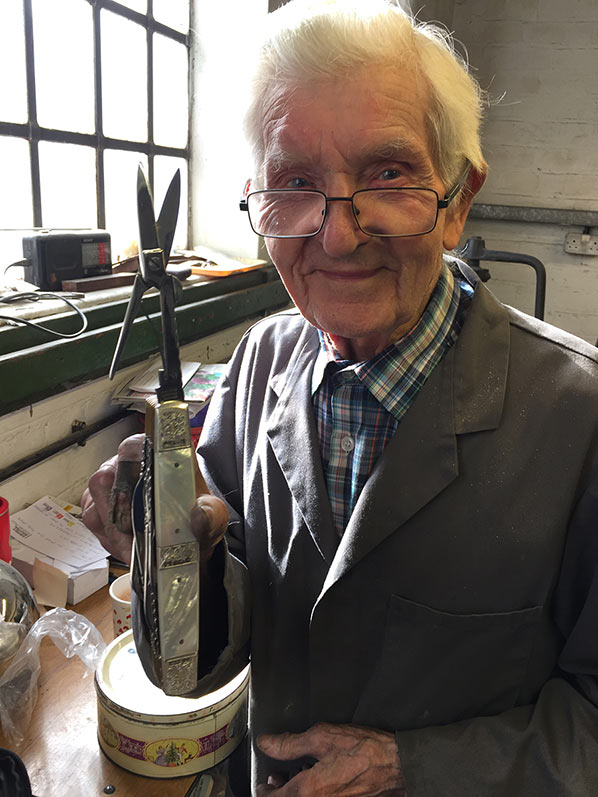 “I wouldn’t want to do anything else” he told me with a smile, “I’m not too good at walking now, but I can still stand and file, and as long as I can do that I will.”

Last year Stan was awarded the British Empire Medal for meritorious service worthy of recognition by the crown. As far as we know this is the first time such an award has been bestowed on a member of the cutlery trade.

Stan doesn’t measure anything, the dimensions come from the natural materials, an individual piece of antler, horn, rosewood or mother of pearl, he shapes the rest of the components to suit. Everything is done by hand and eye, including the fancy work of filing intricate decorative patterns into the backs of springs and blades.

When all the shaping work is complete, the blades and springs are carefully heat treated to give the requisite springiness or edge retention and then polished to a bright finish. The components are numbered so that all the parts for each individual knife remain together throughout the making process. Under the little mesters system, separate processes would have been carried out by specialist tradesmen and the batch of work passed from one workshop to the next.

Over the years Stan has made pocket knives for Buddy Holly, Elvis Presley, U.S. Presidents and many more, he still has a four year order book. One batch included a knife for HM the Queen and several other important dignitaries and statesmen from around the world, but he also gave one of them as a thank you to a bloke who had mended his car, which tells you everything you need to know about the relative values of friendship, time and money. 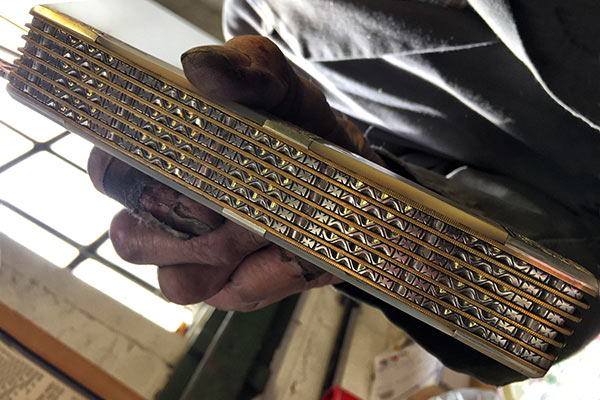 Stan’s workshop is within the wonderful Kelham Island Museum, an excellent arrangement that means there are always folk around if he needs a hand and also that visitors to the museum get to see the real heart and soul of the city of Sheffield; skilled people making tools by hand.

You can read his obituary, printed in The Guardian, here.

Footnote: if you are planning a visit to Kelham Island Museum and don’t want to miss the magnificent twelve thousand horsepower river don steam engine with it’s 50 tonne flywheel, it runs at 12pm & 2pm Mon - Thurs and 12pm, 2pm and 4pm on Sundays, (the museum is closed on Fridays and Saturdays). The engine was used for roll forging armour plate for battleships, a similar, albeit slightly larger, version of the way the new Clifton plane irons are made.