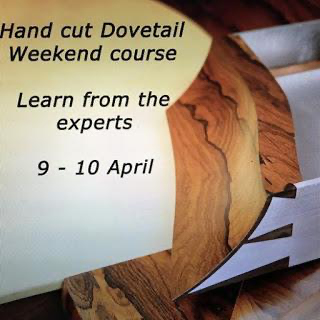 The other day I shared a post from Marc Fish advertising his upcoming weekend dovetailing course at Robinson House Studio in West Sussex. Another good friend, Rob Stoakley, left a comment questioning whether it would be possible to teach a joint like the one shown in the photo on a weekend course?

I should point out that this joint isn't the actual content of the course, that starts with a basic right angle through DT, progresses to half blind followed by a look at the more complex stuff. Having said that, it was my contention that this joint could be taught in a weekend. Once you have grasped the basic principles of hand cut dovetails, it isn't a massive leap to introducing a few cheeky curves and non-90 angles. Before you know it you can be confidently exploring a whole world of creative possibilities that are only accessible with hand tools and the same core techniques. As you might expect the gauntlet was duly laid down and picked up, so here's a brief summary of the method I used to make a mock up of the dovetail joint from Marc's award winning desk L'Orchidée. 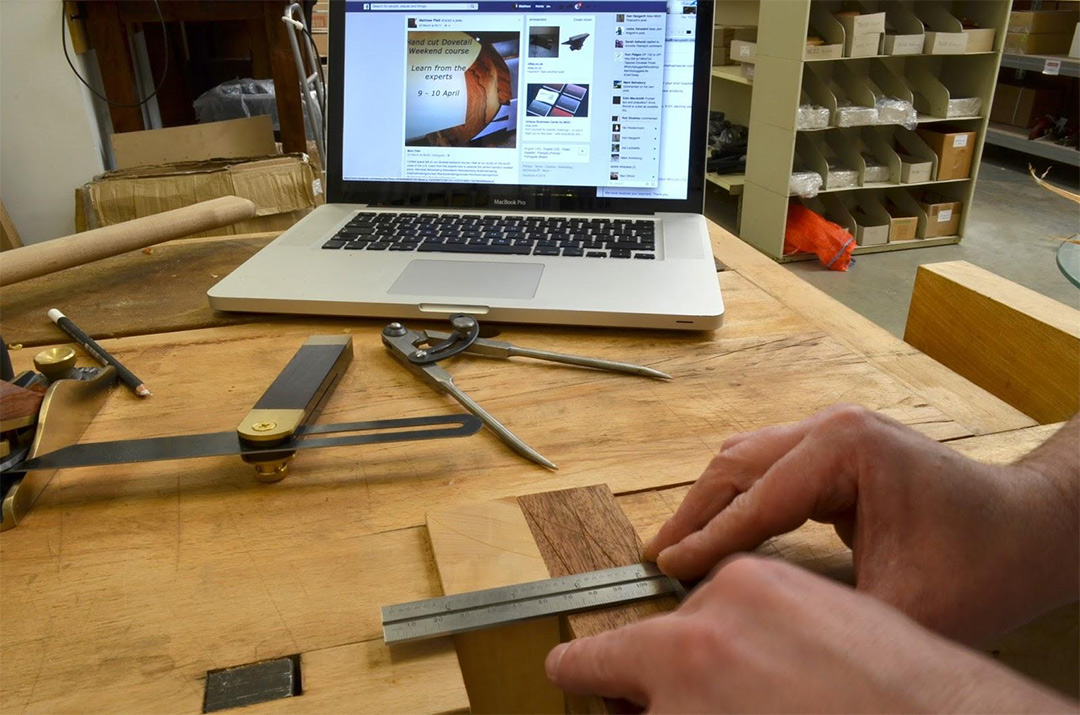 I used lime and mahogany, both relatively soft timbers, dressed square and true and then cut the end of the lime at an angle to replicate the pointed corner on the original.

My dovetail saw was a bit shallow in the blade for the longest edges, so I had to 'make do' with a 14" sash saw from Bad Axe. It is a testament to the smoothness of this tool that by using a very light touch it was still able to cope with the perilously thin mahogany, leaving just a whisper to clean up with a sharp thin bladed chisel. 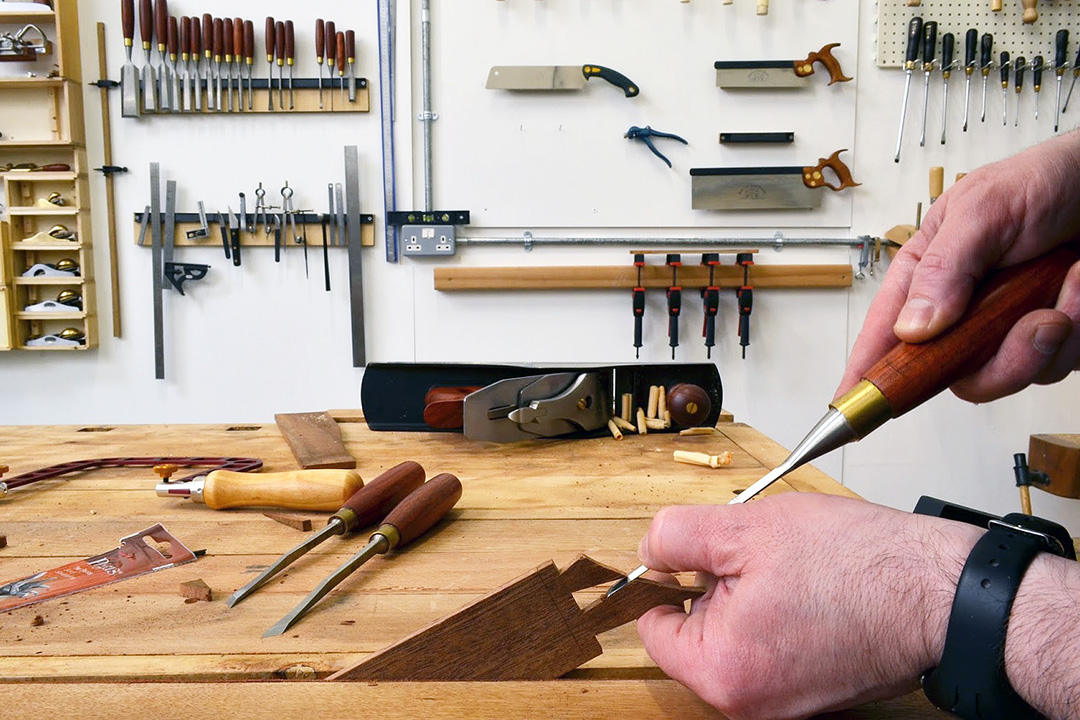 Tails done, I transferred the layout to the front piece with a marking knife and carefully pared out the bulk of the waste to create a corresponding negative space. Fishtail skews are an absolute godsend for the job of tidying up the corners. 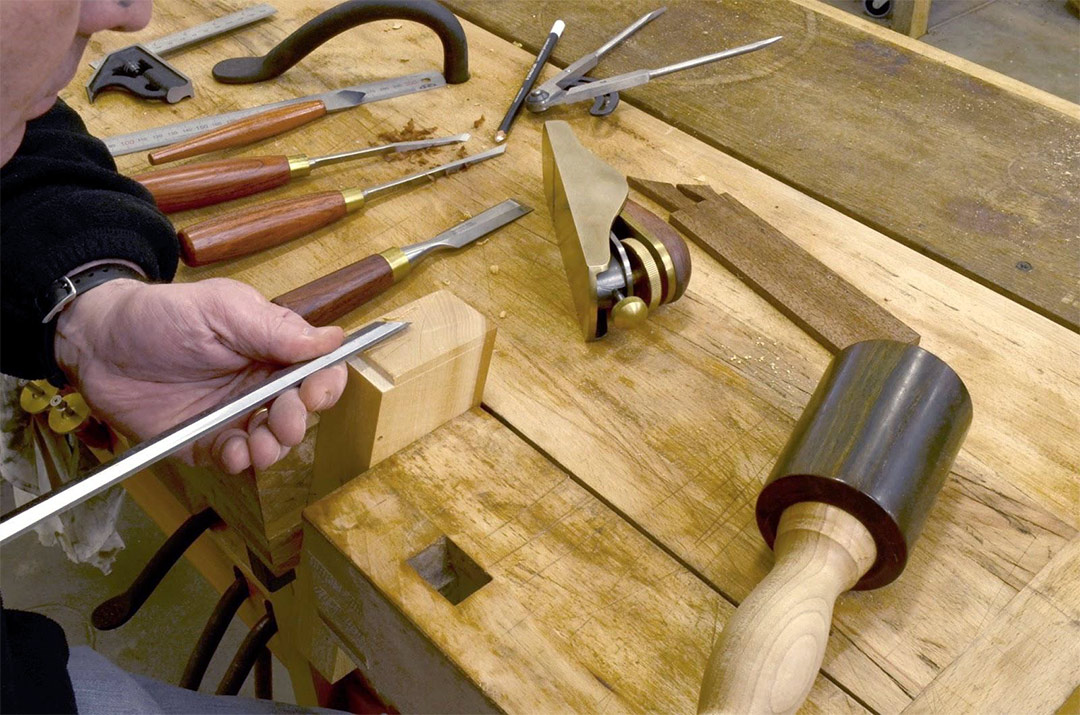 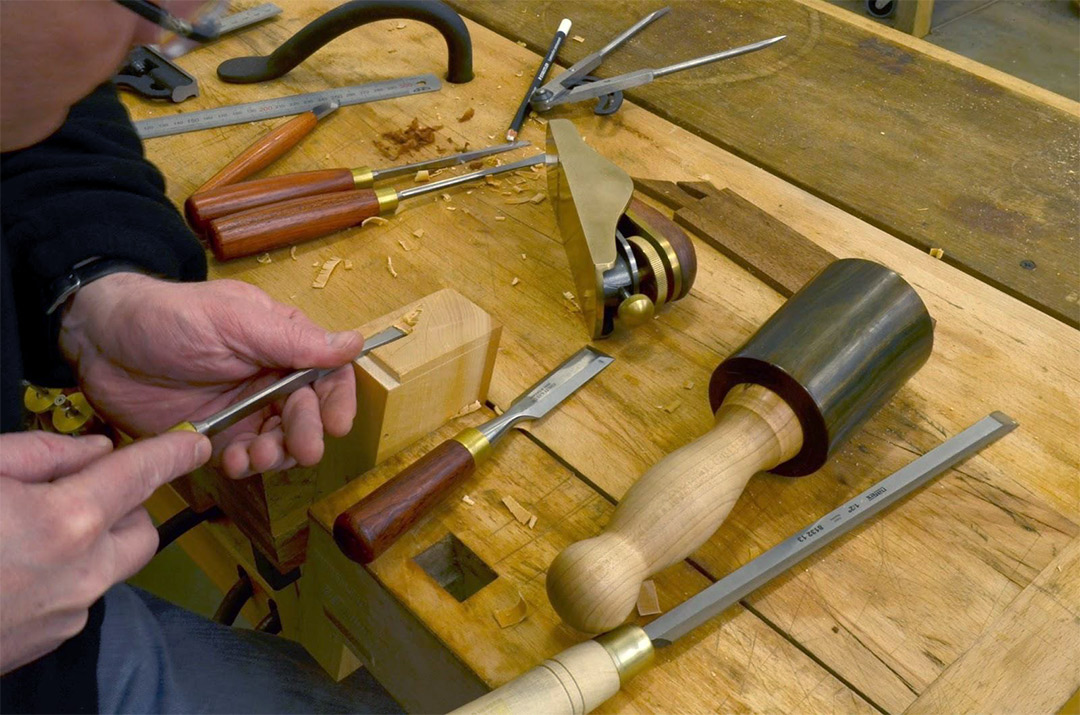 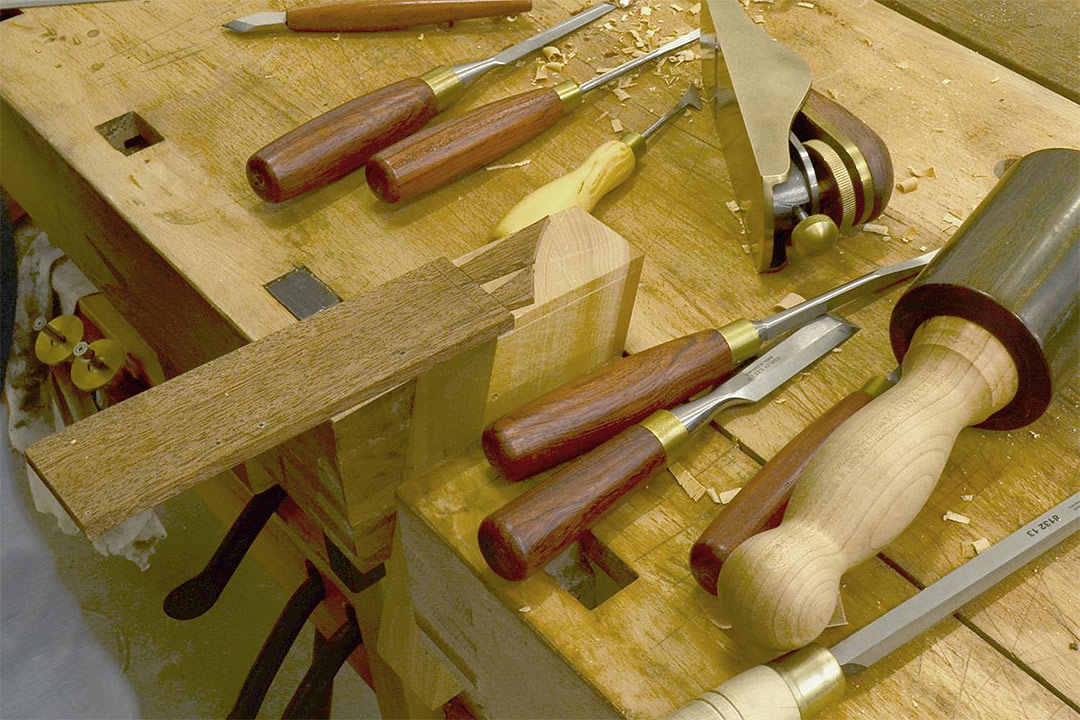 With the joint itself cut, it was on to carving and shaping the front. By defining edges first and then sneaking up on them from the middle it is possible to get complex curves pretty close by eye and then tidy up with sanding or scraping. 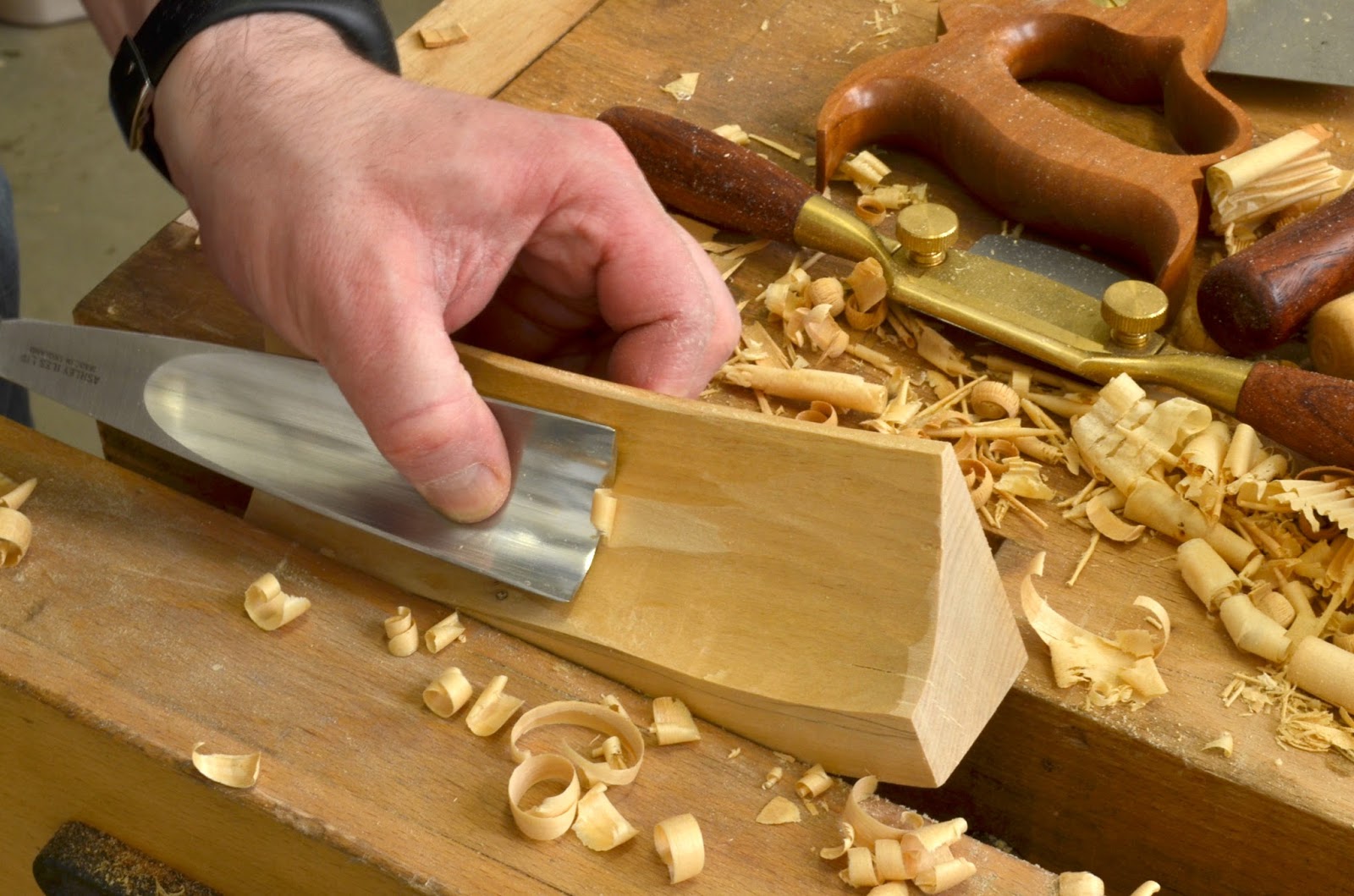 With a drop of glue, a tap with a mallet to bring it together, and the joint is done. 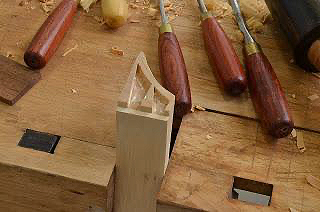 Not as crisp and tight as Marc's joinery by a long chalk, but as a practie piece it was fun to make and demonstrates that with basic hand tool skills, common sense and a little bit of practice, you can take on more complex and creative joinery. 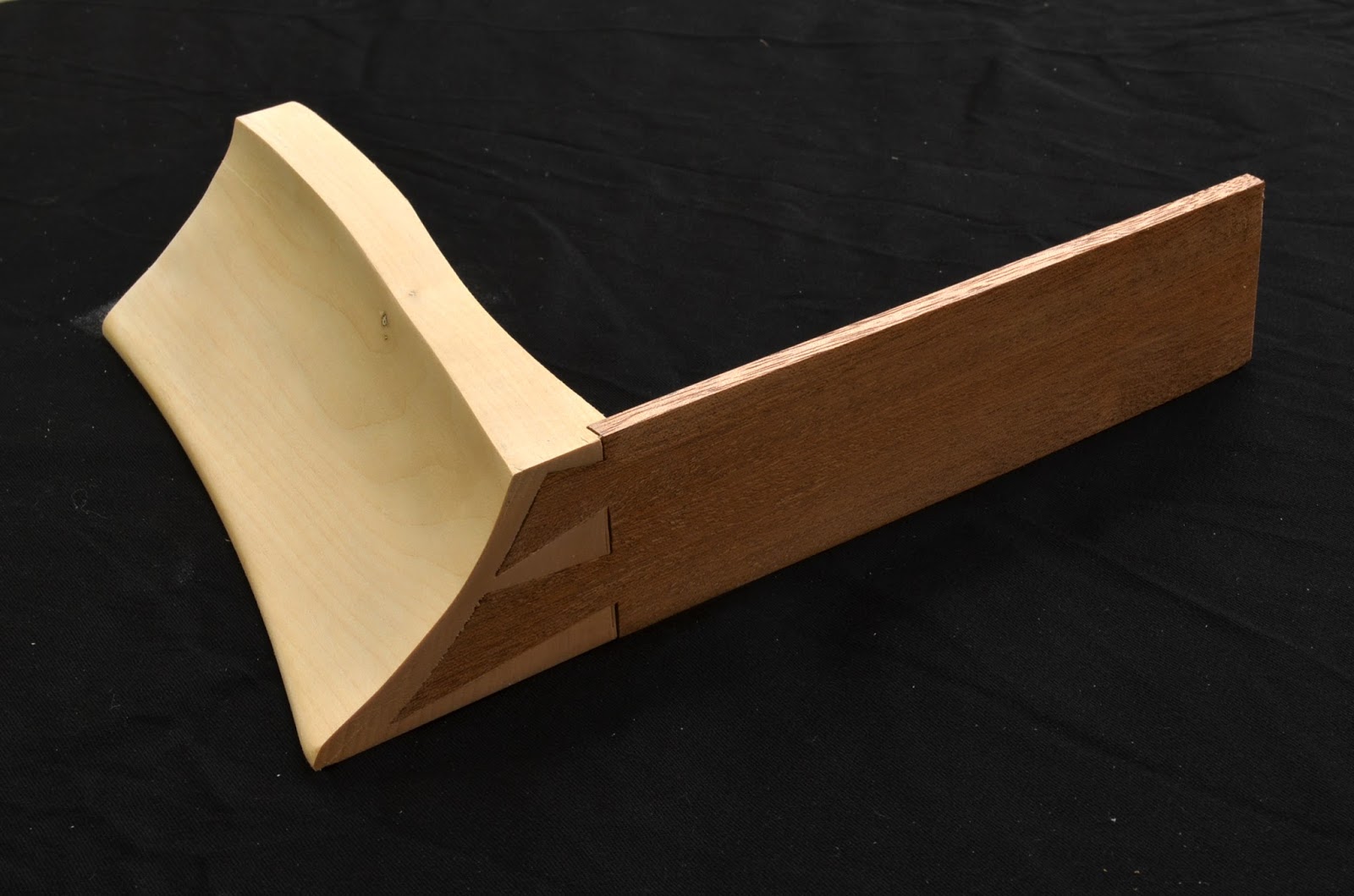